Going viral: The story behind Freddy Fabris’ “The Renaissance Series” 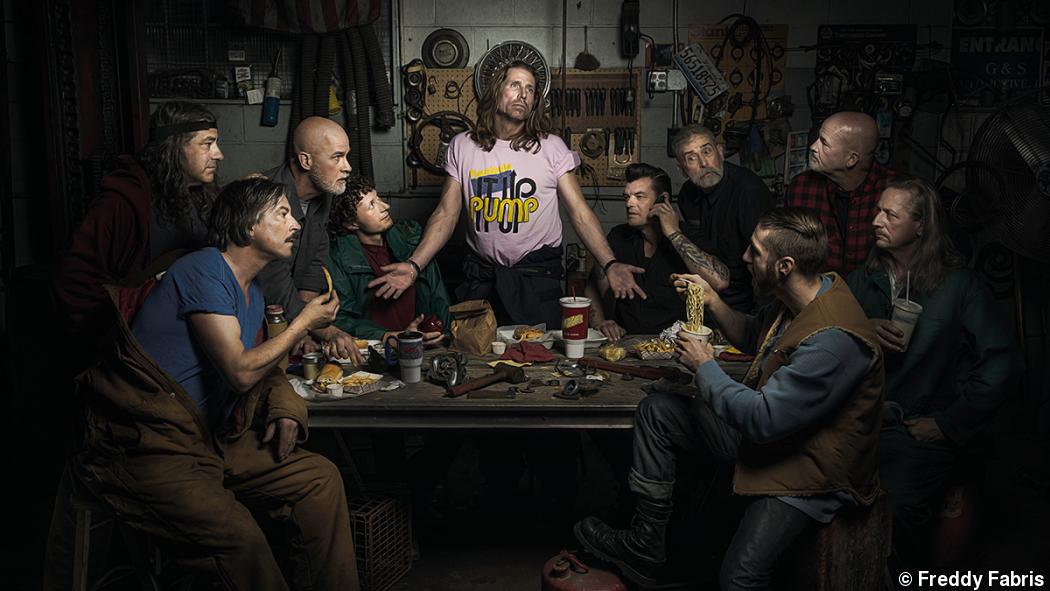 He was in a car shop when the idea unfurled. The hubcap on the wall? That could be the halo above Jesus’ head a la da Vinci’s “The Last Supper.” The worn-in spare parts catalog? The book held up in Rembrandt’s “The Anatomy Lesson of Dr. Nicoleas Tulp.”

“I’d had the idea for years to do some kind of revision of classical paintings,” says commercial photographer Freddy Fabris, who also studies painting. But the question was always how to do things in a way that had not been done before. The auto shop seemed to hold the answer. It was grimy, greasy, chaotic, rich—“It had this grit,” he says. “If you had to get a stylist to replicate it, it would take weeks.” With the right actors, posing, and lighting the setting became the ideal backdrop for a quirky photographic take on classical paintings. And it was a hit. The personal project Fabris titled “The Renaissance Series” went viral. A young Fabris was on his way to becoming a graphic designer, and studying photography, when he learned that a friend’s stepfather, a well-known commercial photographer, was looking for an assistant. The photographer reviewed Fabris’ work and immediately said he’d hire him.

“It was one of those moments in life where you just jump on the train,” he says. “You are waiting at the station and you just jump on.” After that, it was clear Fabris was never going to be a graphic designer. In fact, he dropped his studies entirely since he was learning faster by doing hands-on work in the studio, he says. Before long he moved up to second photographer and eventually launched out to start his own studio.

This willingness to let loose one idea for a better one is central to Fabris’ work. While he started out by committing to a specific photographic concept at the onset of a job, he grew to embrace the benefits of keeping an open mind. “One of the hardest things to learn over the years is to be really comfortable with playing and changing things on set,” he says. What at first seems like a mistake may trigger a better idea. “You never know.”

Take, for example, the man on his cell phone in Fabris’ “The Last Supper.” That wasn’t a planned prop. At one point during the session, the actor answered an incoming call. Instead of getting frustrated and telling him to shut off his phone, Fabris said, “Will you just do that for the rest of the shoot? Because it’s perfect.” You have to be open and welcoming to the flow of creativity, he says.

The same applies to teamwork. Fabris gives his colleagues plenty of room to contribute their own flavor to sessions. For example, for his Renaissance series shoot, Fabris knew he wanted a certain palette of hues for the wardrobe—that palette is what makes the image recognizable as a Renaissance homage, he explains. But outside of those guidelines, he left it up to the wardrobe stylist to choose the clothing. In fact, it was she who chose the pink Reebok “Pump it up” T-shirt for the mechanic standing in for da Vinci’s Jesus figure. “And it just cracks me up,” Fabris says. Such collaboration and sharing  is a fulfilling part of the creative process for him. Fabris’ portfolio of ad work is deep with brand giants—Coca-Cola, Adidas, Axe, McDonald’s, Panasonic, and the list goes on. But when he has the budget and a solid concept, he still makes time for personal work. “The great thing about personal projects, especially ones that are a little closer to what I do when I’m on assignment, is that it allows you to express things,” he says. “So many times you’re hired to do something because of your particular view and set of skills and creative approach, but you’re still getting paid for it. You have a lot of people having positions, and they have a bunch of objectives, and a budget, and a timeline. So your freedom is limited to a certain extent.” With personal projects, your objectives are different: Did I get out of my comfort zone? Did I push myself? How much did I accomplish from the original vision? How much did the idea grow? Did I collaborate? “That’s the thing I love,” he says. “You throw an idea onto the table and you see this thing grow.”

“The Renaissance Series” was a joy to grow—lots of laughter on the set, the fun of working with actors to help them zero in on a pose, a prop, a facial expression that perfectly (and humorously) emulates classical works. But Fabris could have never anticipated the series’ continued growth after it was completed. “At first I shared it with the ad community,” he says. “I sent out email blasts or direct mailing—the usual means of spreading your work.” But then he got an email from an editor at HuffPost who asked if he’d like to write a blog about it. He agreed and sent her the post. “A week later my inbox exploded. This thing just got reposted everywhere,” he says. “I was in awe.” On Bored Panda alone, it garnered 300,000 Facebook shares. “I was not expecting that at all. I get it with cat videos, but not with ‘The Renaissance Series,’” he laughs.

Going viral was a learning experience, and lesson No. 1 is that viral energy cannot be tamed. “There is no way you are going to control where your stuff gets posted,” he says, so don’t even try. The first couple of days he scrambled to reply to every single email inquiry. But by the third, he wrote up a press release with images attached and sent that out as a reply to reporters and bloggers. “It can be overwhelming. I don’t have a team of people working on that.”

It’s also rewarding, he adds. “You can do great commercial work, but you are never going to get an email [from someone] on how much they love your commercial work. Not from England or Kentucky, saying, ‘My dad was a mechanic and I saw your images and I just love them.’ That’s a really good feeling.” The exposure has brought him business and provided a springboard for creative commercial projects. “I’ve had a lot of ad agencies reaching out to see if they can pitch the images to clients,” he says. This year he did a job with an ad agency in Wisconsin for which the client, Snap-on, wanted images in the style of “The Renaissance Series”—set in a car shop with mechanics using its tools—but with a “Goldilocks and the Three Bears” theme. The challenges were unique: how to make the mechanics seem bearlike, how to tell the story in 17 images, how to work the required safety goggles into the wardrobe, how to scout the perfect location. “It was very interesting to have a commercial job that had such a creative side to it.”

“One thing I don’t read enough about commercial photographers is that we are problem solvers,” Fabris says. “A lot of things happen from the moment you get the job till the moment you shoot the job. You are dealing with different people with different interests—from the client to the creatives—so you have to try to keep your creative vision in tact throughout the process. You have to solve a lot of things along the way.”

Fabris’ openness to that artistic and logistic journey continues to solidify his success in both his individual projects and his career. “If you are open to the creative process, things happen.” 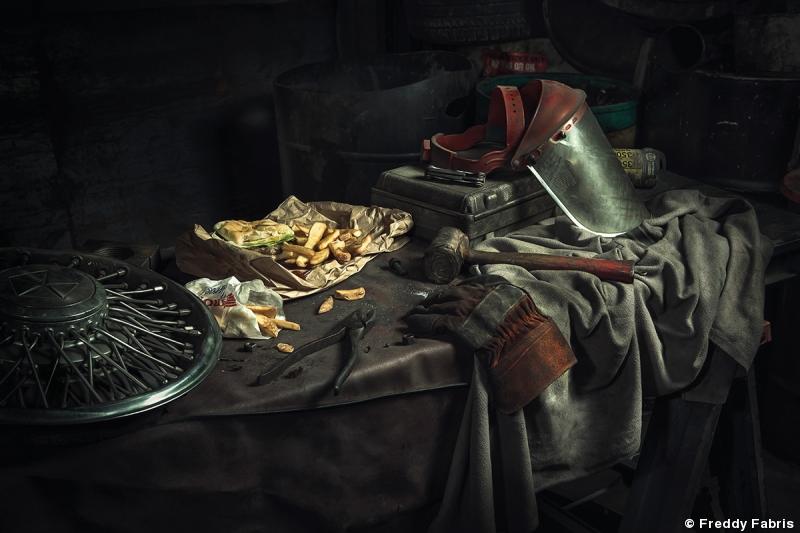 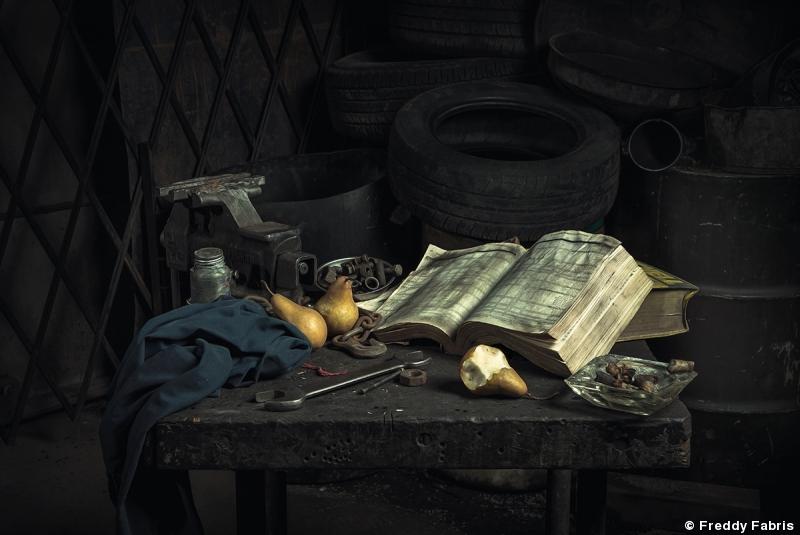 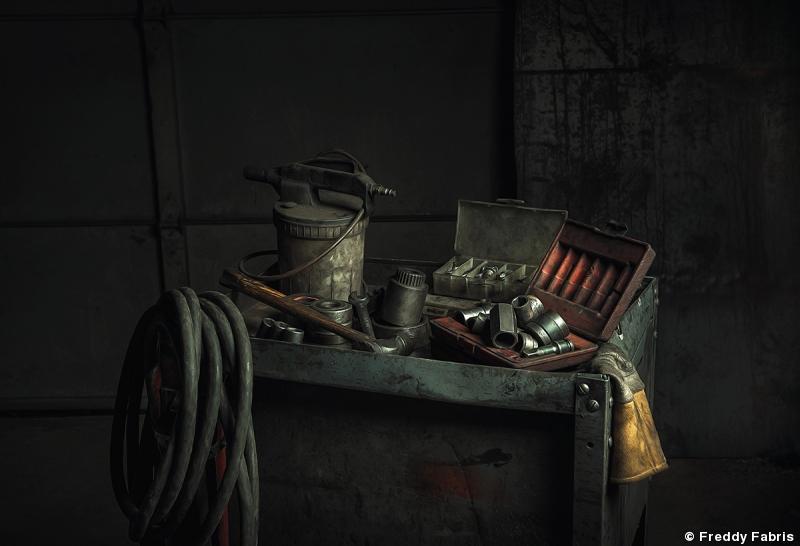 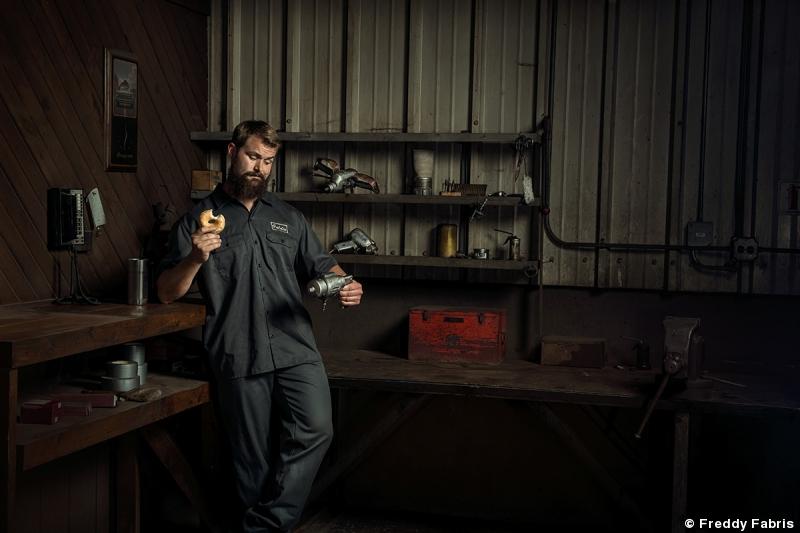 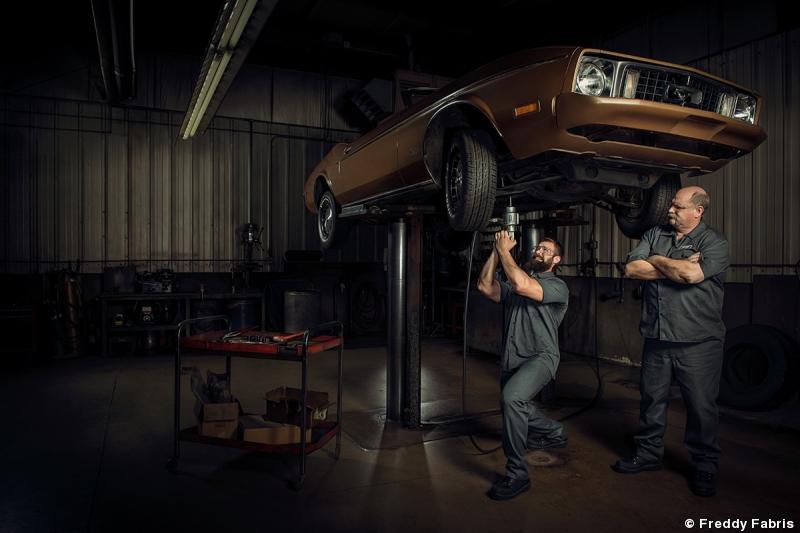 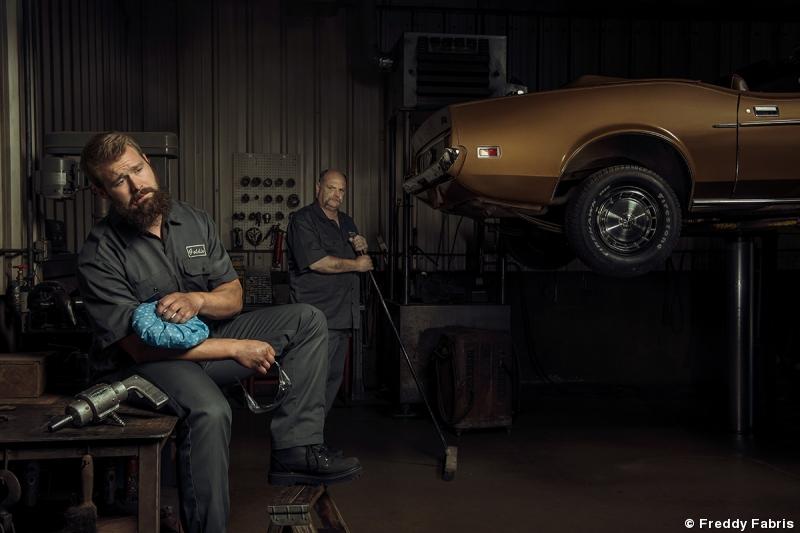 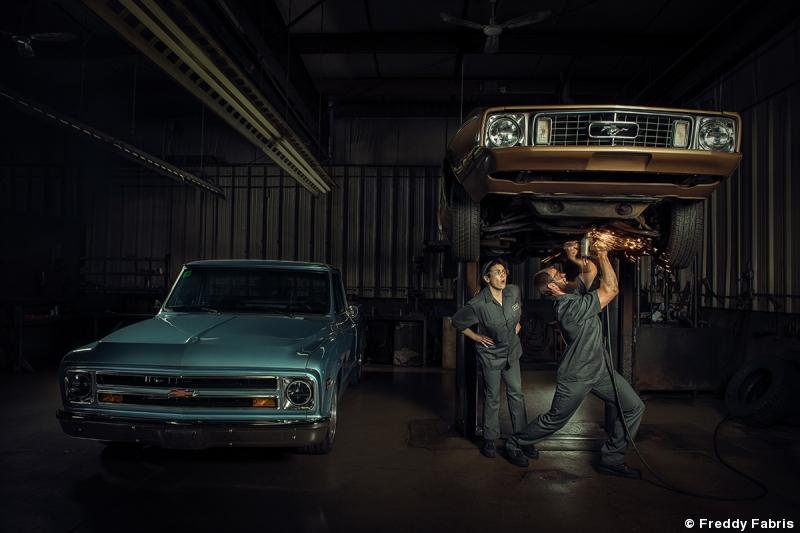 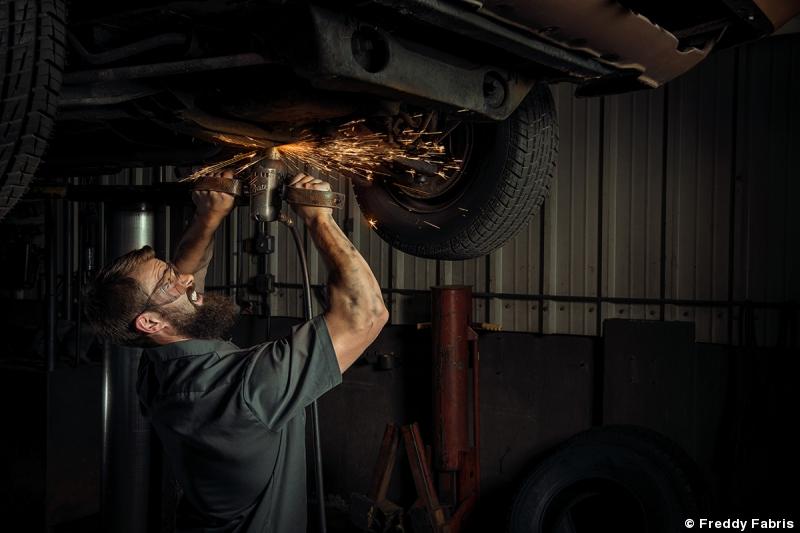 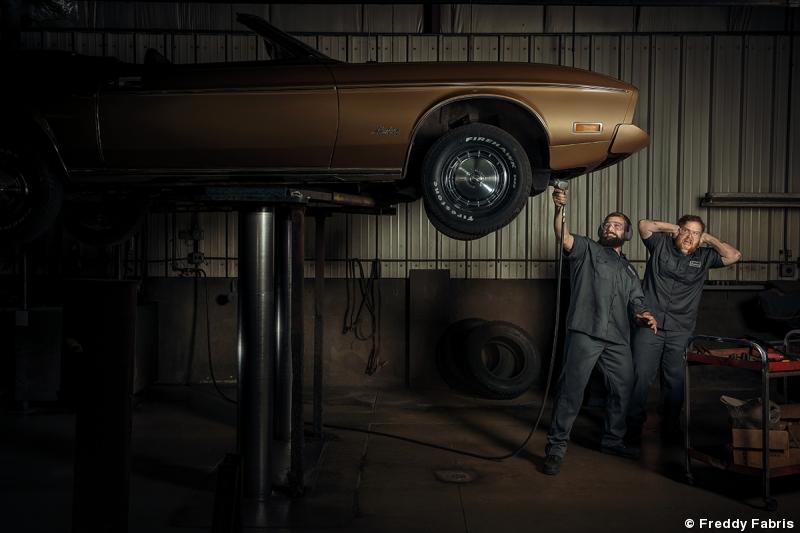 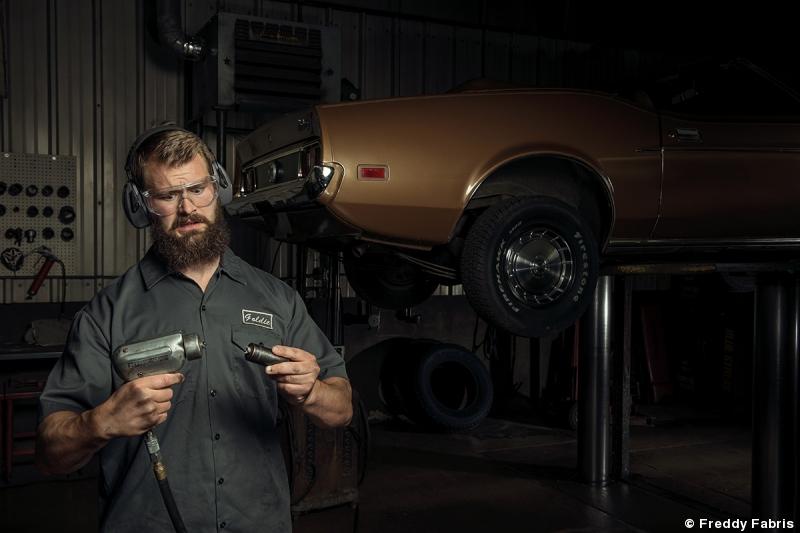 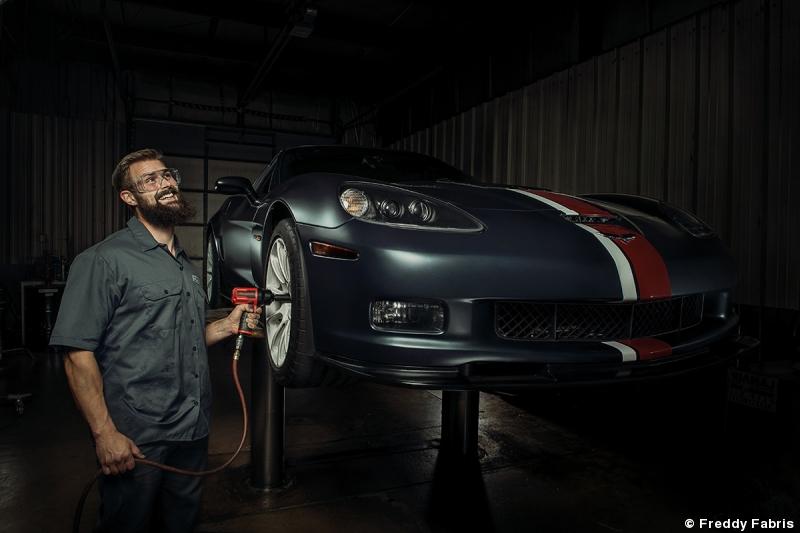 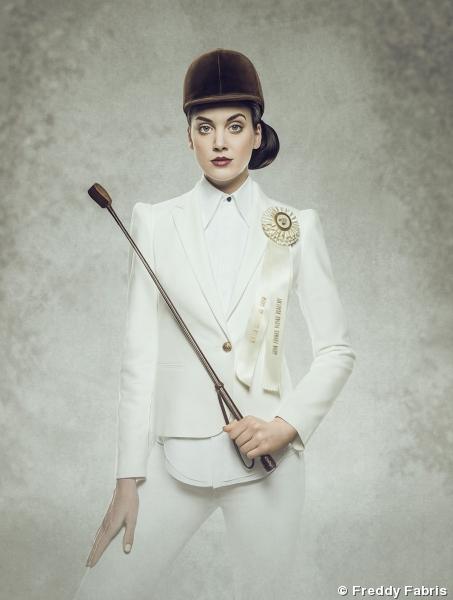 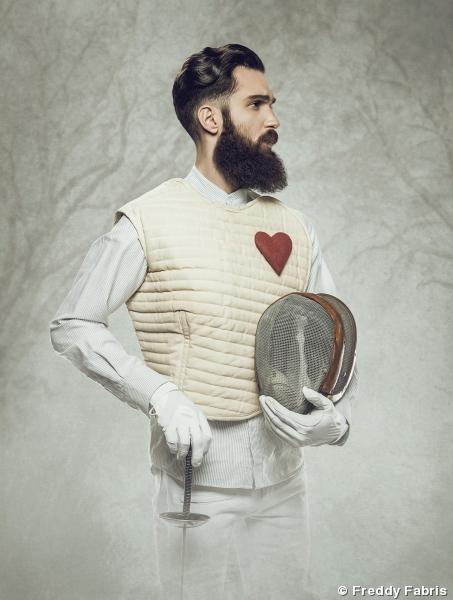 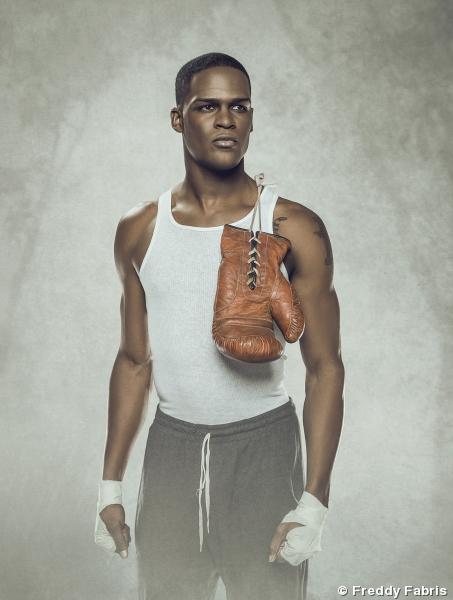 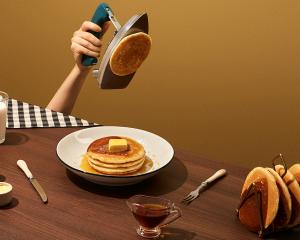 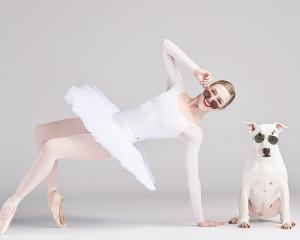 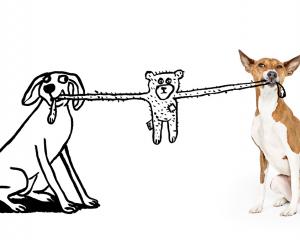