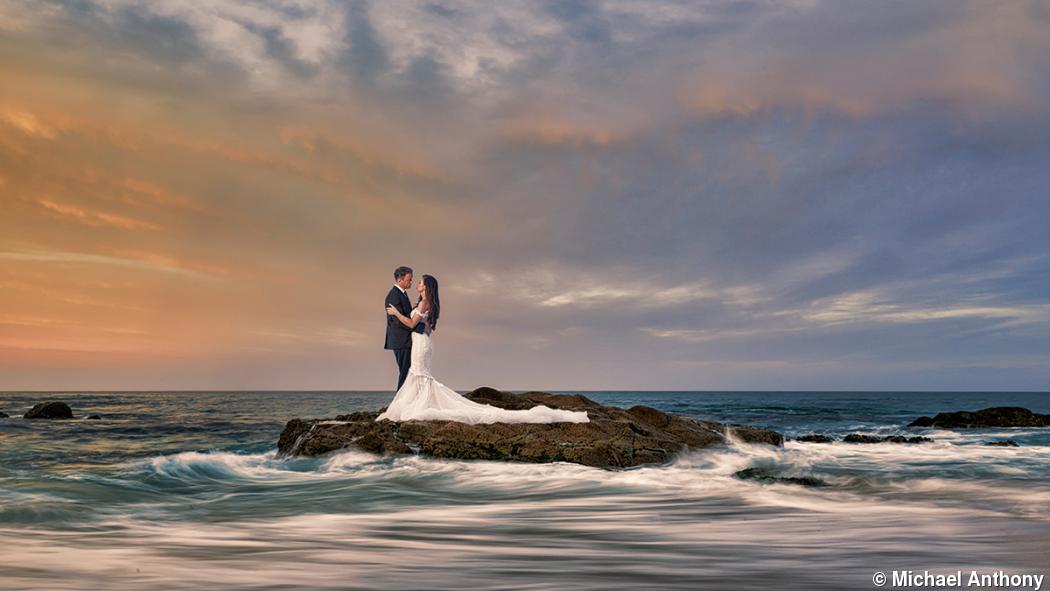 It wasn’t a shot anyone ever would have asked for. Dress wrapped in a trash bag, hair underneath a shower cap, the bride gathered up her skirt and scurried up a hill to her venue, laughing, as her wedding planner shielded her with an umbrella. Rain had forced her 2015 nuptials in Lake Como, Italy, indoors, and photographer Michael Anthony captured this hectic scene between a brief outdoor shoot and the reception. It wasn’t perfect, but it was real, and to Anthony, that’s what made it so special.

“It helped to tell the story of everything that was happening,” Anthony says. “If I were to tell [the bride] the day she came in for her consultation that we’d be taking photos of her in that condition, she would have never hired us, but it ended up being one of her favorite photos of the day.” Anthony’s been drawn to the journalistic challenge of capturing these fleeting “moments between moments,” as he describes them, since he started his Los Angeles-based business in 2011. Over time, his style has evolved to include a cinematic flair, incorporating dramatic landscapes, fashion-based portraiture, and creative lighting that give many of his images a painterly quality.

“I try on a wedding day to do a little bit of both for our clients,” he says. “When we’re doing their portraits we try to do these creative, wide-angle shots that kind of showcase the day and help tell their story. And then when we get to the actual content of the wedding day, we capture a lot of the moments between our clients and the people that they are inviting to the wedding.”

Between his flagship wedding brand, Michael Anthony Photography, and sub-brands, including Studio 23, a network of associate photographers, Anthony and his colleagues take on 120 to 130 weddings a year, and he photographs about half of those himself. Paying close attention to what clients purchase—and don’t—has been one of the biggest factors in the way Anthony’s style has evolved over the years, he says. “If clients aren’t buying a certain type of image—if they’re not buying an image where, say, they’re really small in the frame, which I used to do in my early days of getting to this style—we have to make adjustments,” Anthony says. “Their posing, their body position, the way that we use light to direct the viewer to the subjects—all of those things make a big, big difference in the final image that the clients are purchasing.”

Since posing and lighting go hand-in-hand, Anthony focuses his adjustments in these areas to achieve the effect he wants. When it comes to posing, his goal is to keep things as flattering as possible while still making the subjects look natural and believable. He gets at this, he says, by building a narrative behind each pose.

“We’re always trying to tell a story with these images,” Anthony says. “An image that has a story is a lot more interesting than a photo that’s just a portrait of two people posing.”

Articulating that story correctly to the client is key, he adds, because if they don’t understand it, the expression, mood, or pose might not be quite right.

Anthony explains: “What I’ll do is say to them, ‘Guys here’s the shot that we’re trying to get: OK, groom, you’re going to be leading her, walking up the steps to the church. I want you putting all your weight on your front foot, looking back at her, we’re trying to tell the story of you guys walking to your venue.’ Or maybe, the opposite. ‘Guys, the story here is the wedding just ended, we’re going to have you guys walking off into the sunset right now, so I want you looking at each other, happy, having fun, and we’ll work with you to get the expression.’” When clients are nervous, uncomfortable, or stiff, Anthony uses motion posing techniques to get them to open up a bit. This might involve asking them to dance, run, or walk, which helps relax them while also allowing him to capture dynamic images for album spreads. With particularly tough clients, a little spontaneity can result in a really special moment, he says.

For example, he may ask a couple to stand 30 feet away from him and walk toward him, looking at and interacting with each other as they go. Using a 70-200mm lens on his Sony camera, he’ll shoot through those moments. Then, he’ll send them back to do it again, only this time, while they’re walking, he’ll suddenly ask the groom to twirl the bride around as if they’re dancing.

“When that’s not planned and they didn’t know that was coming, a lot of times they might mess up that first time when he tries to twirl her around. And when that happens, almost every single time, they’ll bust up in laughter and then you have great moments,” Anthony explains. “So by varying things up and trying to get them to be spontaneous you can sometimes entice moments that you wouldn’t have otherwise gotten out of them.”

With lighting, Anthony takes a more scientific approach. Even when shooting outdoors, he typically uses off-camera flash to brighten up his subject and help direct the viewer’s eye where it needs to go. Profoto is his current lighting system of choice, and it’s a careful combination of this and natural light that makes many of his portraits resemble paintings.

“We use a lot of off-camera flash in our work to help bring out the highlights in our subjects,” Anthony says. “And then I’ll typically try to look for ways to have the sun bring out the highlights in our background. So we’ll use lighting off-camera and the natural ways we have available at our scene in order to give images appearances of texture—highlights and shadow—and that gives it that painterly look.” The biggest challenge in executing this, or any other lighting or posing technique, Anthony says, is the unknown. That 2015 Lake Como wedding, where he photographed the bride running in the rain, is perhaps the ultimate example. It was his first destination shoot, and a huge storm rolled in right after he arrived in Italy, washing away all of his careful planning. But hiccups like that aren’t uncommon, especially when working in an outdoor environment.

The key, he says, is to be flexible and look for opportunities in unlikely places. In the Lake Como case, they capitalized on the unique beauty that rain can offer and convinced the couple to take a few shots outside.

“Their portraits had to happen inside mostly, but we still had to be able to get them some images to showcase the sea and showcase where we were,” he remembers. “We basically had to move some furniture around to get some photos that we needed to get outside. We had to find places that we could photograph them underneath canopies and overhangs.”

Sometimes, if a client’s wedding day presents too many challenges or the venue doesn’t provide the right backdrop for Anthony’s signature cinematic style, he’ll do a creative session or a day-after session with them in a place that offers a more scenic setting, like the beach.

“You have to keep an open mind and turn every disadvantage into an advantage, and try to overcome the challenges that you’re going to be faced with,” he says. 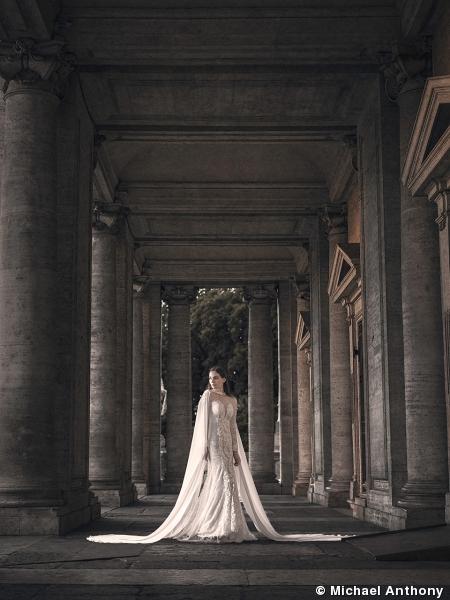 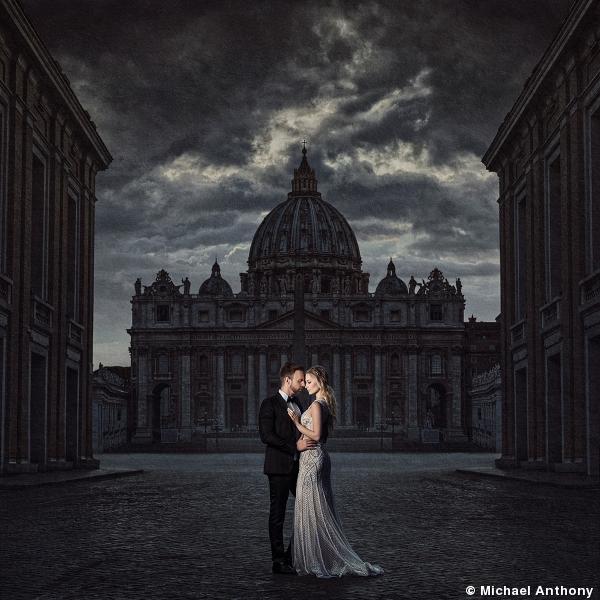 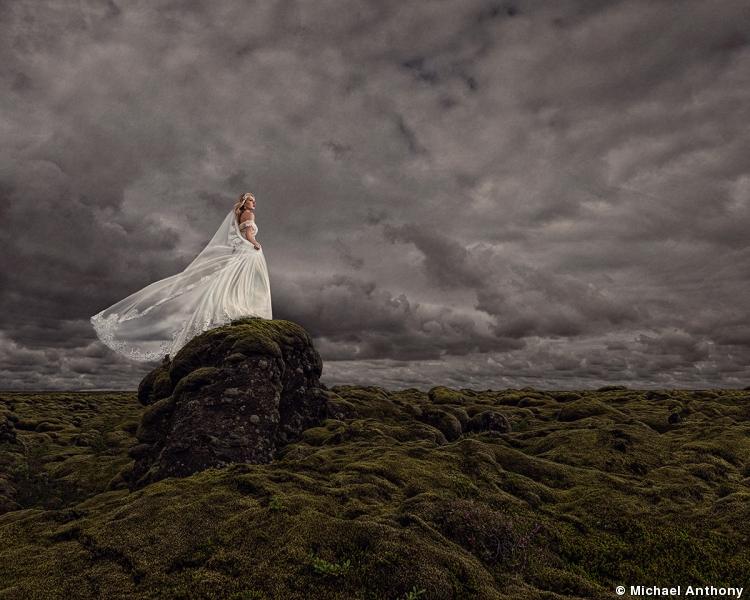 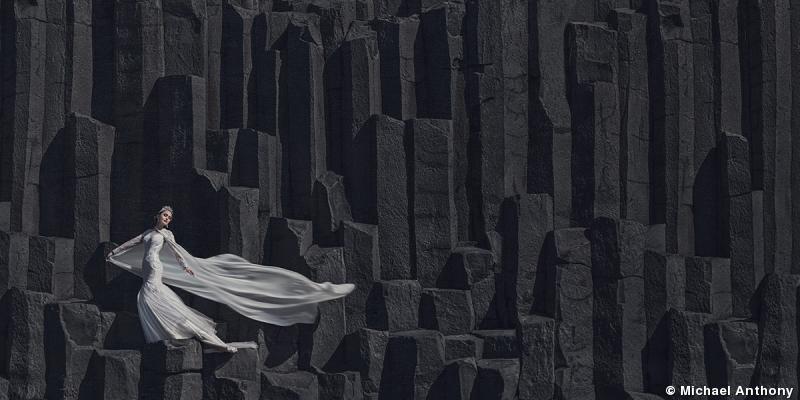 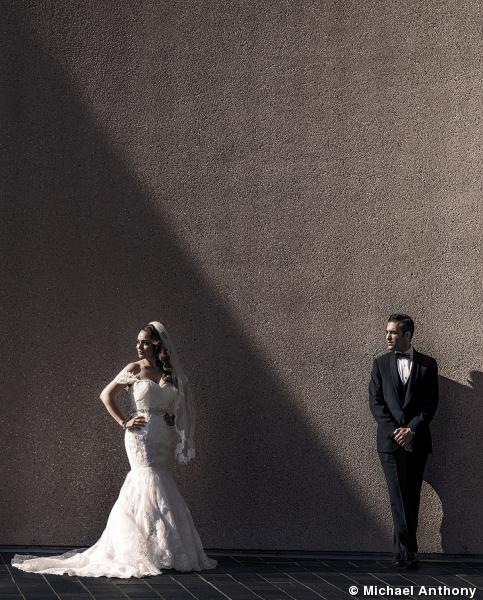 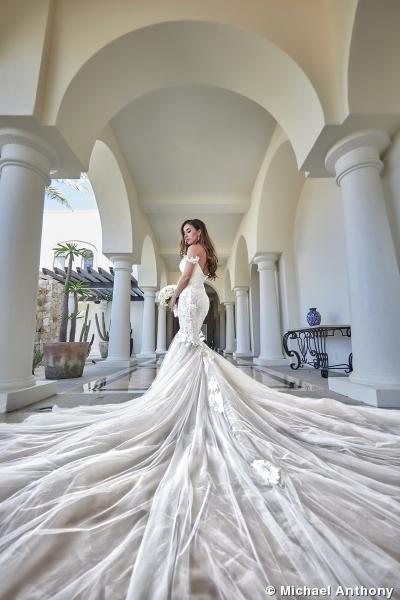 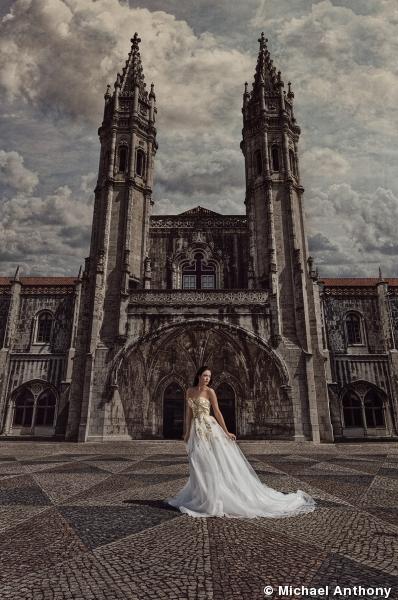 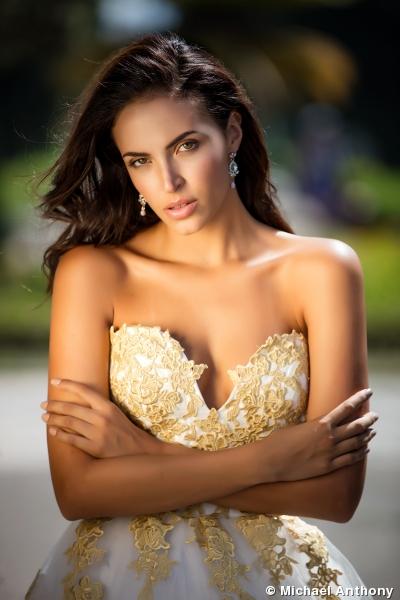 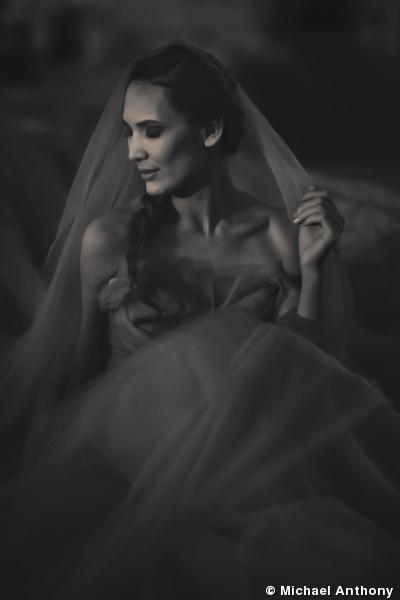 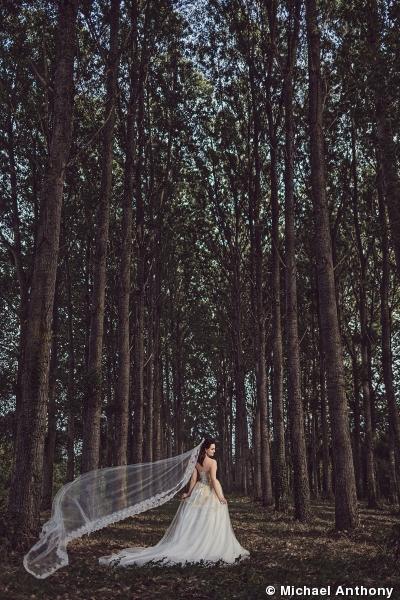 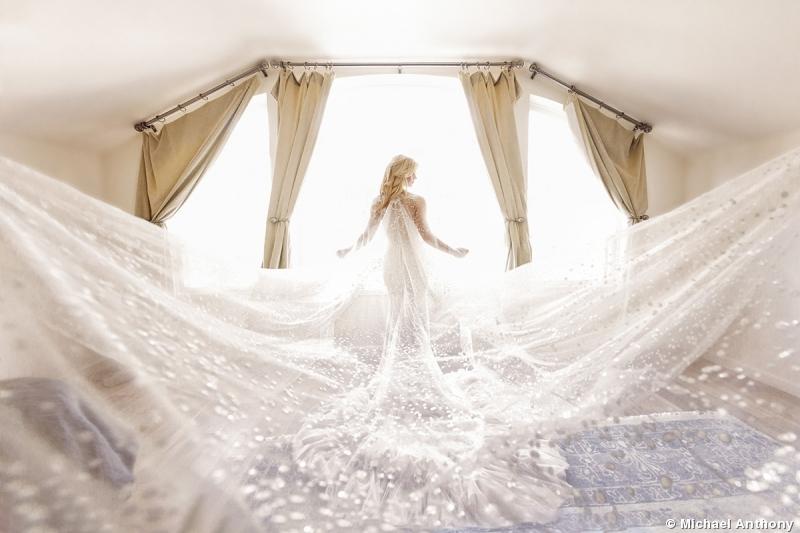 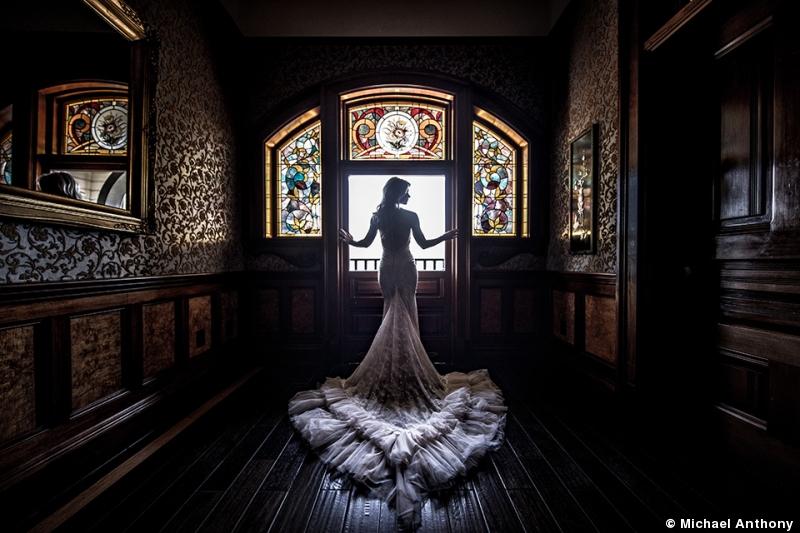 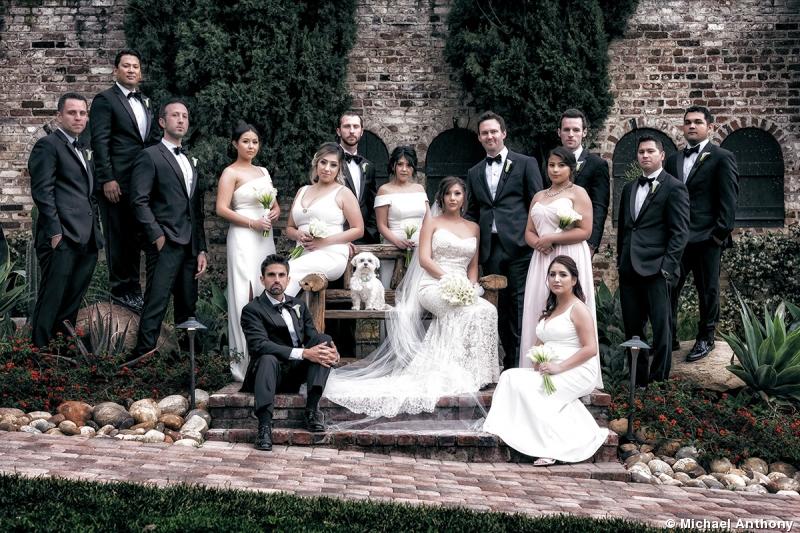 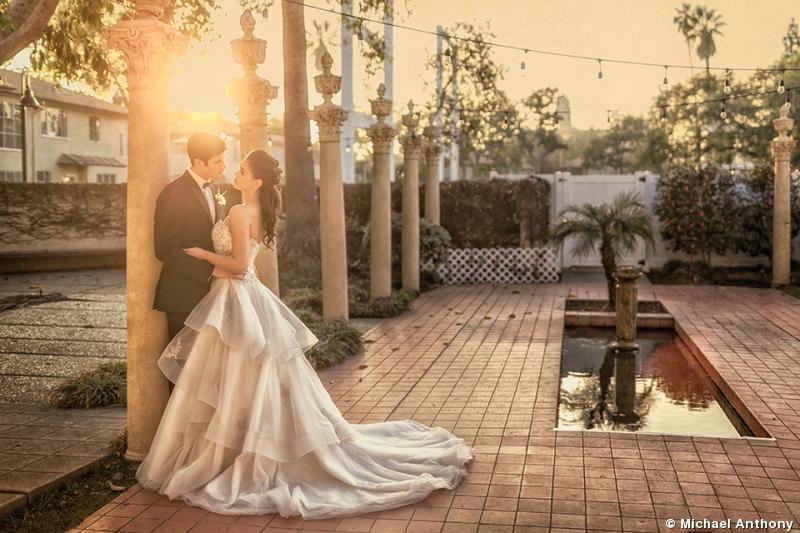 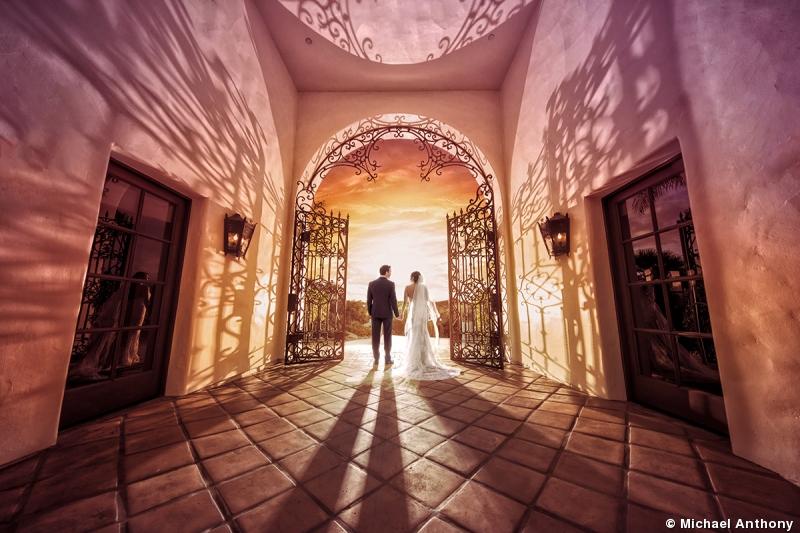 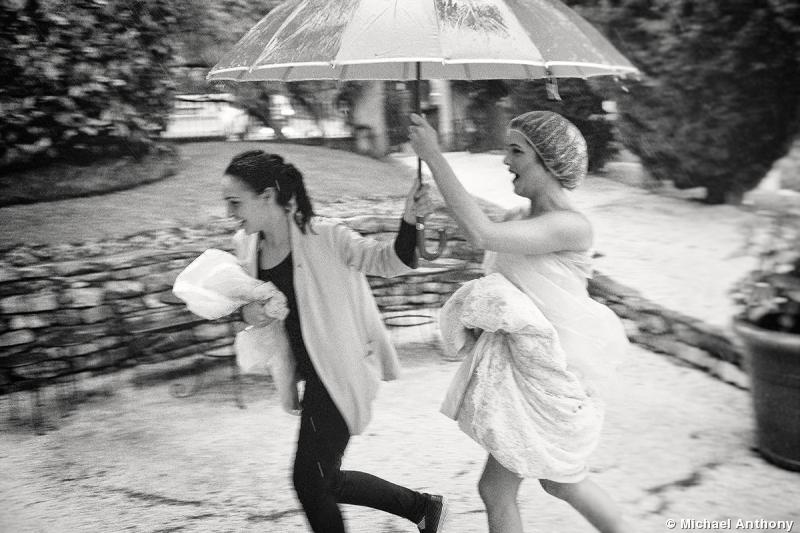 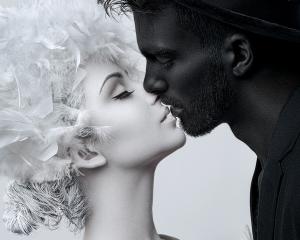 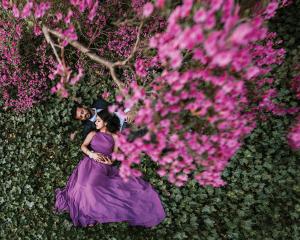 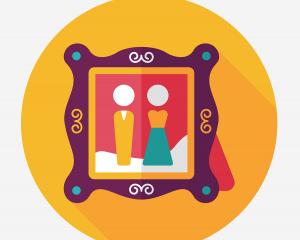