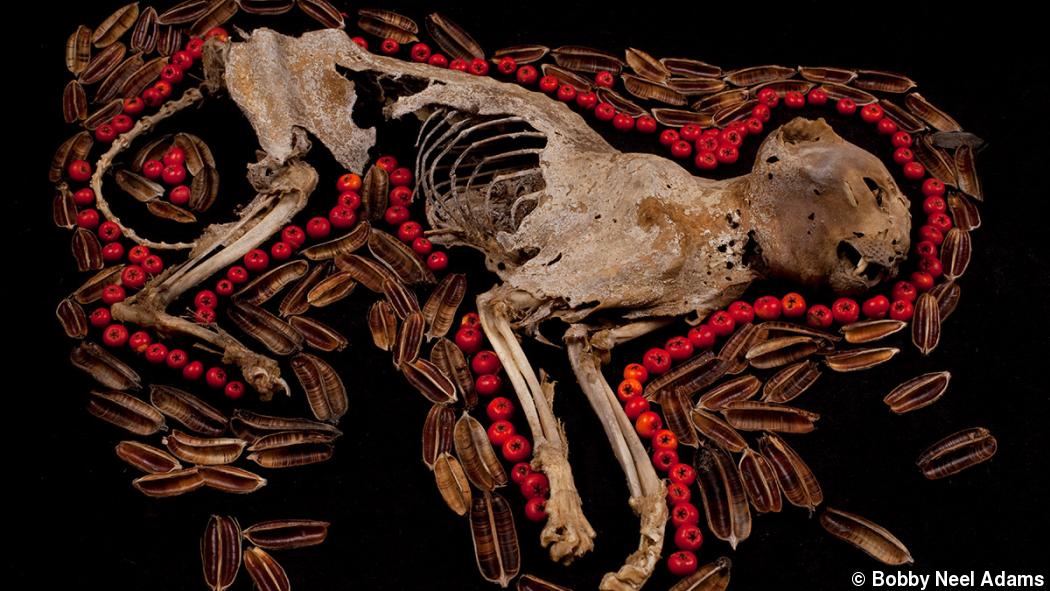 The cat is lying amid purple-streaked chrysanthemums as if suspended in the motion of running. A line of individual petals outline the feline’s form, and a trail of stigmata extend in the lower corner. The cat is dead. In fact, the carcass appears to be roadkill. “I hate more and more what man is doing to this planet by depleting natural resources and raping and pillaging the land,” says Bobby Neel Adams. “We have never been in such disharmony with the natural world.”

This and a series of similar images that Adams calls “Memento Mori” evoke the mourning portraits of the 19th century, though his influence is the 16th century Flemish Vanitas movement and its obsession with death and decay. Common motifs in those still-life paintings were skulls and rotting fruit. Adams likewise uses skulls and skeletons, though some images feature fully feathered birds and furry mammals as well as reptiles and bugs, and he surrounds the carcasses with local vegetation (he lives in Brisbee, Arizona, where, he says, “The migration seasons play a big part in the finding of roadkill”). Technique is a sidetrack

Given the subject matter, these images may not have much commercial potential—“Face it, not too many people want a portrait of a dead creature hanging on the wall,” Adams says. But his work has been the subject of gallery shows and purchased for private collections. Certainly there is art in the way Adams arranges the bed of vegetation, in his use of colors in the objects around the deceased, and in his compositions, whether the subject is laid out on a black background or seeming to float in some ethereal atmosphere. The skills and creativity of a visual artist are at play, but though Adams uses photography to achieve this artwork, he refuses to dwell on the technical aspects or process of his work. Asked to describe his equipment list, he replies, “Canon 5D Mark II, Calumet Elite 2400 strobes. The end.” “I am super not interested in discussing my methods of making these images,” Adams says. “Getting caught up in technique is a sidetrack. It’s not at all interesting and can possibly strip the magic out of an image. Discussing gear and technique is for nerds that have too much time on their hands. That may sound harsh, but I think someone that is compelled will find a way through trial and error, recognizing what you at first thought was a mistake and then using it for your advantage.”

When Adams travels, he rents a motorcycle and explores the city or countryside with no map. He calls it his “Go get lost day.” “I saw much more and became more engaged. I got into some interesting situations, sometimes scary, but I felt more alive and focused. The same can be said for making a photograph. I set off with no map and, oh dear, it’s a failure. But I learn from my failure, so my second attempt gets a bit closer. It’s about the work. There’s no reward without it.”

To understand the depth of his fail-and-succeed methodology, consider the series that first brought him national recognition, “AgeMaps.” The images merge past portraits of individuals with current portraits to illustrate the process of aging. Adams used film and previously processed prints. “I loved the physicality of tearing things up, and if it didn’t work the first time, doing it again,” he says. “I loved watching an image rise out of the tray like a ghost becoming a fully formed entity.” He spent so much time in the darkroom he says his palms turned orange from the silver he absorbed. He transitioned to digital when he was convinced that the resolution was equal to that of a medium-format camera.

Artist in the making

Adams grew up in Fort Collins, Colorado, and as an avid reader found himself attracted to the beat generation writers. While Adams was in high school in the early 1970s, a friend gave him a Miranda camera, which he used to take photos “of things I found interesting.” One of those images he submitted to a Denver Post-sponsored photo contest; it won first prize and went on to take third at the national level. His prize was either a trip for two to Hawaii or $900: He took the money and hitchhiked with a friend to San Francisco. “Here was the world I was looking for, a place where I wasn’t a freak but fairly normal,” he says. He attended Goddard College in Vermont with the intent of becoming a writer, but he also took a photography class where he began, to the shock of his teacher, “tearing things up and re-photographing them. It became very apparent that I was making more interesting photos than writing stories,” he says.

He returned to San Francisco, where he opened a studio with a friend, photographing artwork for galleries, doing editorial work, and launching his “AgeMaps” series. He moved to New York City, landing some shows and freelance assignments and began, again, photographing things he found interesting, such as statues of angels in cemeteries.

On 9/11, he watched the second plane hit the World Trade Tower from across the East River, and on a subsequent trip to San Diego he came up with the idea of photographing airliners “close to the ground,” which is what he named the series. “The images seemed a bit threatening,” he says: “A huge, heavy airplane frozen in the air.” He also spent time in Cambodia and Mozambique on a series of images he calls “Broken Wings” featuring victims of land mines. Another series he began developing, “Family-Tree,” was similar to “AgeMaps” but used composite portraits of two related individuals. While working an assignment in Miami, he made his first “Memento Mori” photograph. “I continued to do this in New York, but subject matter was hard to find,” he says. Residencies in Florida and West Virginia afforded more subject matter, and he’s continuing it with his recent move to Arizona.

All of these series were created using different techniques and feature different styles, seeming to come from the mind of various photographers; and perhaps they do, though it is always Adams behind the camera. “At some point I grow tired of pounding the same nail, making the same photos with the same technique,” he says. “Slowly I exhaust myself and stop working for awhile. Then I start shooting out of curiosity, and if I keep going, suddenly I realize I am working on a new project and my ideas start expanding and, hopefully, going deeper.”

One recurring theme does link these different series of images: “the fleetingness of life” and the inevitability of death. “This is something that the ‘AgeMaps,’ ‘FamilyTree,’ angel photos, ‘Broken Wing,’ and the ‘Memento Mori’ series all address in some way: life to death,” he says. “Maybe even the ‘Close to the Ground’ series, but possibly that’s more in my head than the viewers’.” Images of aircraft seeming to scrape rooftops and trees do evoke troubling sensations of mortality, and the “AgeMap,” “FamilyTree,” and “Angels of Dust” images have a gothic feel. The subjects in the “Broken Wings” series, however, are generally smiling or expressing determination in their faces and posture. And with his “Memento Mori” series, Adams somehow captures life even in subjects that are dead.

“My little job is paying homage to the creatures we are obliterating,” he says. 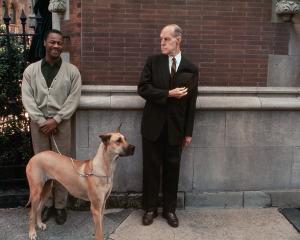 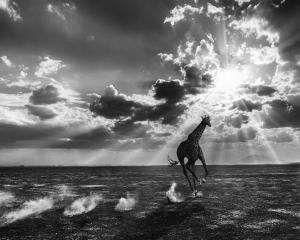 Wildlife photography from the ground up

Profile
“You can’t get into a person’s character with a telephoto lens. Why should you expect to get into the character of an animal?" 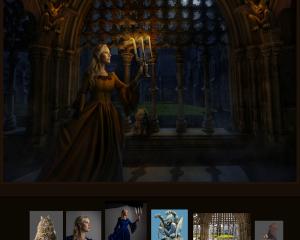