Adventure and business success are on the open road

By Amanda Arnold May 2018 issue 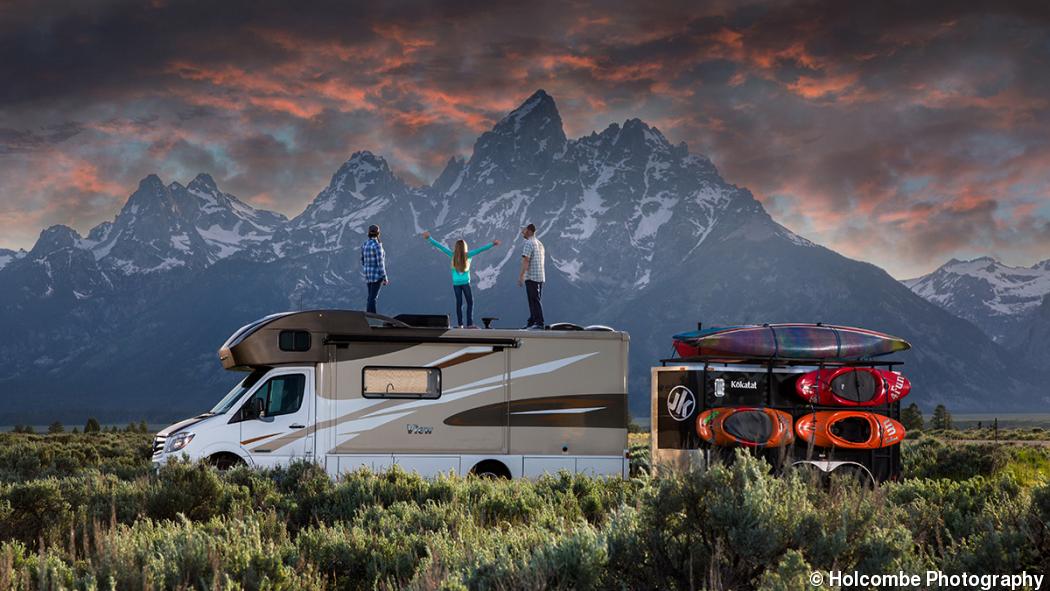 It sounded doable: Capture a kayaker and a whale in the same frame. But a week into their whale watching assignment on Quebec’s St. Lawrence River, Peter Holcombe had a bank of images of migrating whales and a bank of images of his wife and daughter kayaking. No whale/kayaker composition in the bunch. “It was impossible to predict where the whale was going to surface,” says Peter’s wife and business partner, Kathy. For seven days at both dawn and dusk, she and daughter Abby dropped their kayaks into the water and attempted over and over to position themselves near breaching whales while Peter made photographs with a long lens from the riverbank.

On the last day, she thought they had it. “The sun was setting, and I looked up and there was a fin going along the top of the water,” says Kathy. At last, she thought, and frantically began paddling toward the fin. “I get close to it, and from behind me I hear a commotion and I stop and look and I hear, ‘Not a whale! Stop! Not a whale!’” The next moments were terrifying: “The fin was 3 feet tall and it turns toward me and sinks in the water. I kept waiting for Jaws to attack me,” she says. But it didn’t. It never resurfaced.

Who’s to say what the elusive creature was—perhaps a basking shark or the area’s resident 20-foot great white, the park ranger told them. Whatever the fish, it made for a great story, which Kathy parleyed into an article to accompany Peter’s images. “We published an incredible article on our experience paddling with whales,” she says. “So our client was super happy. And what we delivered ended up being better anyway.”

“That’s usually how it is,” adds Peter. You go into an assignment with a particular concept in mind, “but in creating it, what you get is so much better than what you imagined.” It’s a common theme in Peter and Kathy’s story—reality exceeding their dreams. Five years ago, the Holcombes had a successful home studio in Boulder, Colorado, where they specialized in landscape-centric weddings and family portraits. Since much of their work involved making photographs in dramatic natural environments, they were often on the road. After one photo session in Utah, they lamented the fact that they couldn’t stay in Moab a few more days. And that’s when Kathy floated an idea: “What if we bought an RV and instead of going back to Boulder, we just stayed there and skipped the whole going-home part?”

Peter thought about the prospect for a minute before declaring it crazy. “But she really planted a seed,” he says. Over the next year the couple mulled over the idea of a life lived on the road, which increasingly seemed not so crazy. “We love being in these amazing destinations and we love photographing a huge variety of places. And we love spending time personally in these places. So the whole home studio work thing could be melded into something we could do from an RV anywhere in the world. Why wouldn’t it work?”

In the spring of 2014, they made the jump. They put their home studio on the market, and it sold in two and a half hours. Since the buyers wanted to close early, the Holcombes had just one month to organize an online education for Abby, shed belongings, select a vehicle, and get on the road. Initially they’d planned to refurbish a van themselves, but at Peter’s father’s insistence, they agreed to check out models at a local dealership. Most of the vehicles were exactly what Peter didn’t want—mega RVs so bulky and luxurious they couldn’t tackle the wild places he wanted to photograph. But then the salesperson showed them a Winnebego View. It was compact, built on a Mercedes Sprinter van body, and was a Class C motor home, so it had an attached cab and an overhang extending above the cab. Its clean design, economy of space, and drivability won over Peter and Kathy. They found a similar used vehicle for sale in Texas, and Peter flew down to drive it back to Colorado. Their RV life was a go. Abandoning a home studio for a roving RV may sound risky, but the Holcombes had a solid business plan. “We had a full year of weddings already booked,” Kathy says, “so we had enough income for the year from those weddings. And we figured we could book portrait sessions from the road.” The only real difference in their business would be making do without a studio for in-person sales sessions. It was a matter of easing clients into the idea that they wouldn’t be going to the studio anymore, Peter says.

“We went into it thinking, If we can keep our business afloat for a year, we will come back [to Boulder] and get it up and running again,” Kathy says. “Our original goal was to go for a year if we could make the numbers work. And now four years later it has been the best thing for our business. Our business is stronger than it has ever been.”

Much of that strength is thanks to brand work, which has replaced wedding work as their primary source of income. When the Holcombe family adopted the RV life, Peter and Kathy revamped the Holcombe Photography website, retitling it Famagogo, to tell the stories of their adventures via a blog, photo galleries, and social media. Daughter Abby, who was nine years old when they set off, and dog Tucker are prominently featured in many of the images. The unique story of a family living a life of perpetual outdoor adventure proved appealing to brands like GoPro, Kokatat apparel, Winnebago, Mercedes-Benz, Five Ten footwear, and Black Diamond Equipment—all brands the family was already using. So partnerships made sense.

Each brand has its own requirements, Kathy explains. “Some want us to generate unique content that is just for them, and they share our written story with an image or a video [on their own outlets]. And other companies just want to share things we have already created for our own social media channels.” A few partnerships have led to more traditional commercial projects where, for example, Peter is responsible for producing the stills for a product launch. He also stays in touch with the paddling sports magazines to take advantage of occasional editorial opportunities. And sometimes clients reach out for a family portrait session.

For the most part, though, “Companies just want us to photograph us as a family and through my images tell our story,” Peter says. “I am photographing my family and myself, and companies are hiring us to do that, which is really different. I had not heard of that before but it’s been really fun. It’s kind of a dream. We pick where we want to go, and capture it, and tell this story, and the brands are buying our story.”

In four years on the road the Holcombes have explored 49 states, so at this point their knowledge of photogenic landscapes is unmatched. “Our specialty is we have been everywhere,” Kathy says. “They rely on us to know the best location for any project.” A company can come to the Holcombes looking for photos of its products on a beach, in the mountains, in the desert, and the Holcombes can instantly suggest several ideal locations. Not only that, but they can drive to those locations at any time since they’re not tied to any one locale. “We have been there, done that, and know the possibilities,” Peter says. The Holcombe’s one-year jaunt has morphed into an indefinite journey. “After one year was over, we felt like we had found the secret of life,” Peter says. “We’d just gotten it figured out, so we said let’s do two years. And then two years rolled around and at that point we could not put an expiration date on this. I’m not saying we’re going to do it forever, but we have no reason to quit right now. Our business is better than ever, better than it had ever been, and we are living life to the fullest.”

With ready access to the greatest landscapes in the country and the freedom to explore at will, Kathy says, Peter has been able to start photographing “the images that were rattling around in his head,” exploring personal projects that had been put off to “feed of the machine of the mortgage.” In doing the work he’s passionate about, people have taken notice. “So really it was an organic process. He created the images he wanted, and people appreciated that,” so the business followed.

Life on the road isn’t for everyone. The takeaway of the Holcombe’s story is to be true to oneself, Peter advises. “I know this from being a photographer over the years: When you try to copy what somebody else is doing, you maybe can do that for a little while, and it will work to some degree. But when you break away from all that and say, This is what I want to do, and even if you don’t think there’s any value to it, if you pursue it long enough and put everything into it, it will turn into something. Usually something way better than you originally imagined.”

RELATED: A gallery of the Holcombes' images 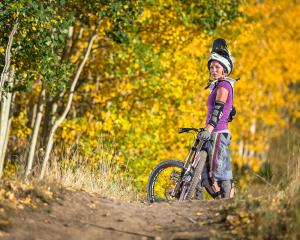 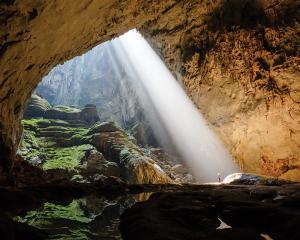 Ryan Deboodt is addicted to discovering and photographing caves

News
Cave photography as the last frontier for Ryan Deboodt 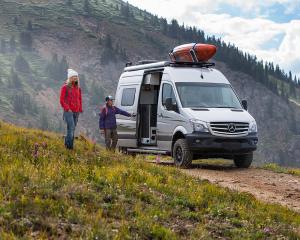 Gallery
An open-road lifestyle dream comes true for the Holcombes