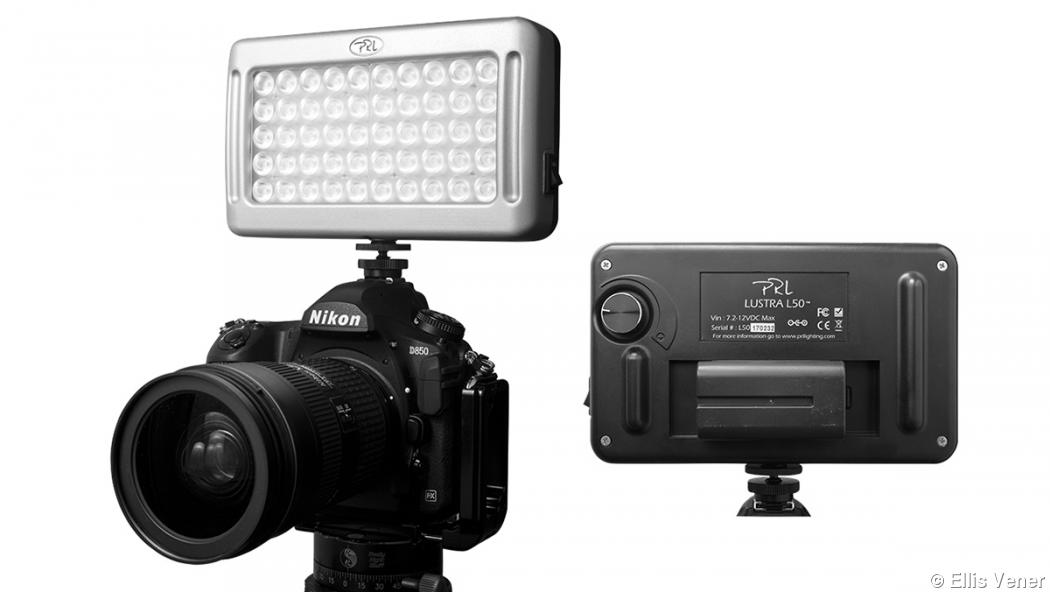 As LED lighting becomes a more viable option for still and motion photography, it’s important to look for a balance between high output, high quality light, cost, and size. The Lustra 50 from PRL Lighting fits that bill. For still photography the Lustra 50 is bright enough to use as a key or fill light for close-up work like still life and head-and-shoulders portraits or as an on camera light for event shooters. It’s equally well suited for small-scale video production.

The Lustra 50 has the light quality and sturdy build of large, cinema-grade products from Litepanels, Cineo, and Arriflex in a compact 7.7x4.5x2.17-inch form. This makes it small enough, and at 0.985 pounds light enough, to fit comfortably in a camera’s hot shoe mount or on a light stand, though you will need to supply your own adapter to mount it on a camera. The product’s 50 surface-mount micro-processor-controlled LEDs are arranged in a 5x10 array for wide-angle coverage, perfect for on-camera use when photographing events with or without the 12x8-inch SofBox accessory. There’s more to getting color right than just color temperature. To know how well a light reveals true color you need to know the color rendering index (CRI). The closer to 100 the CRI is, the more accurately the light source shows the true color of an object. As part of the quality control process, manufacturers test and sort (bin) individual LEDs according to their color quality. And PRL Lighting is using some very high-spec, well-binned LEDs. With the help of the lighting department at PC&E Atlanta I measured the CRI and color temperature using a Sekonic SpectroMaster C-700-U color meter, which confirmed that the Lustra 50 has a CRI of 96.1. Color temperature is also important, and from the top to the bottom of the light’s five-stop range, the color temperature varied no more than 10 degrees from 5,600K.

The quantity of light produced by an LED is affected by the type of lens or reflector and whether a manufacturer decides to overdrive the LED by running excessive current through it. Overdriving an LED creates more light in the short term but shortens the life of the LED and has negative effects on color quality and color stability. PRL decided to underdrive the Lustra 50 LEDs and pair them with specially engineered total internal reflection lenses to maximize the amount of light produced. At full power, I metered the Lustra 50 as putting out its claimed 1,200 lux at 5 feet. This means that for still photography at ISO 100 you can use it as a key light at f/4 plus a 1/2-stop at 1/250 second with the light 3 feet from the subject, or as fill or accent light. It’s bright enough to work well as a fill light even outdoors. The stepless output controls allow you to dim the light over a five-stop range to match it to ambient light levels.

Unlike many LED lighting instruments, the Lustra 50 is not a bi-color LED array. Its daylight balance has been engineered to maximize output and complement the processors used in still and video cameras.

Bi-color arrays work by dividing equally the total number of LEDs used between those balanced for 3,200K and those with 5,600K output. At both ends of the range only half of the LEDs are producing light and the other half are turned off. For intermediate color temperatures both sets are dimmed, reducing the full output potential. A bi-color LED works great if you have a large array with hundreds of LEDs, but then you lose the small form factor.

The aluminum housing is simple and rugged, with detents on the front and ridges on the back to make it easy to grip. There’s a lot of room between the circuit board at the back of the housing and the LED panel at the front. This enables passive cooling provided by air flowing through the vents lining the top and bottom of the unit. A single 1/4"-20 thread-socket is centered on the bottom. The controls are simple: On the back is a rotary dial dimmer and on the left side panel is an on-off toggle with a red glow light to indicate it’s on.

There are two options for powering the Lustra 50: 12V 30-watt AC inverter (included) or unplugged with an NPF L-series 7.2-volt battery (not included) that locks into a recess on the back. With a healthy 6,600mAh battery, the run time is approximately 3 hours at full output. The PRL Lighting Lustra 50 is the perfect bridge light for those seeking a portable constant light source for both still and video production. At $335 for the Lustra 50 light alone, $399 for the Lustra 50 Kit (including the SofBox and a gel set), or $1,099 for the Lustra L50 T 3-lite Kit (with SofBox, gel set, and stand mount for each, plus a case) it isn’t the cheapest LED option. But given the quality and quantity of the light, as well as the build quality, it’s a good value. 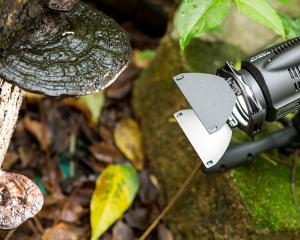 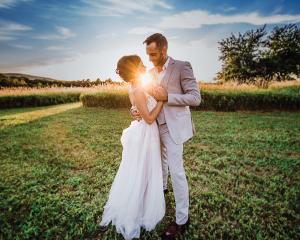 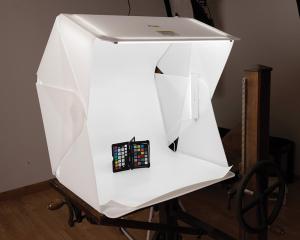