Jaime A. Castro wanted to capture a traditional water droplet shot when his mom texted him her latest painting. An idea came to mind: paint droplets rather than water droplets. He experimented with various mixtures and ultimately found that heavy whipping cream with food coloring produced the best consistency. Rather than capture the drop in air, he photographed it in water, using a 5-gallon fish tank, which allowed him more time. “With several bowls of blue and orange mixtures, several plastic pipettes, a light tent, and Alexa blasting Rush music in the background, ‘The Big Bang Theory’ exploded into life,” he says. Jaime Castro Digital Images is based in Spring, Texas, and specializes in fine art, abstract, travel, and music photography.

LIGHTING: A fixed LED desk lamp was placed at the top of the bowl, and a Yongnuo YN560 Speedlite on the left side. All was assembled within a ProMaster LiteTent with a black background.

POST-CAPTURE: The final image is a combination of two captures. “I did not want to mirror the image because it would seem too obvious, so I chose both images shot within seconds of each other to get the subtle difference,” he says. In Adobe Lightroom he adjusted white balance, exposure compensation, contrast, shadows, clarity, vibrancy, and color saturation. In Adobe Photoshop he combined the blended the images, removed water bubbles, dust and other unwanted spots, cropped the image, removed the fish bowl outlines, did dodging and burning, and used DxO Collection Adjustment filtering. He used a gradient frame, letting the image leak over and beyond the keyline fordramatic effect. Final adjustments were made in Lightroom. 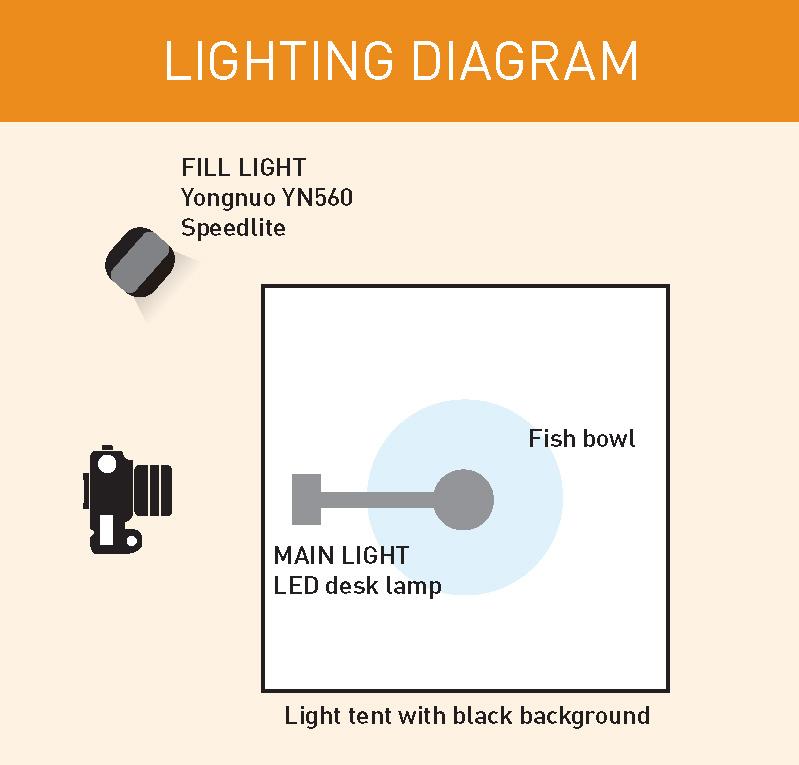